Alfa Romeo eSports: The drivers put in a sensational performance 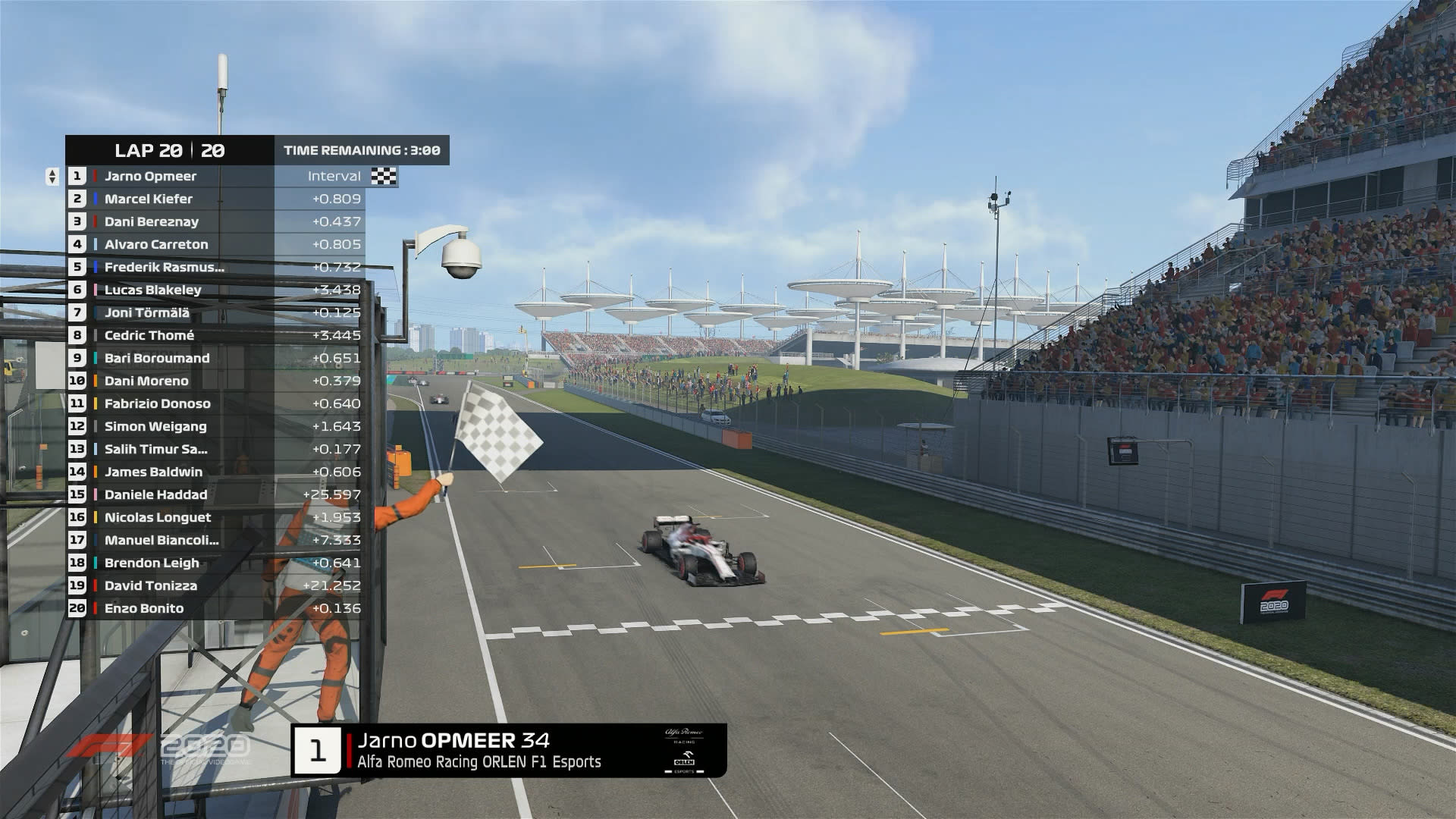 Two wins and four overall podiums in the first three races propelled Jarno Opmeer and Alfa Romeo Racing ORLEN F1 Esports Team into the lead of the F1 Esports Series as the 2020 campaign began with a bang for the team.

Pitched against the best drivers in the world in the most competitive field in the Series’ history, Opmeer and team-mate, Daniel Bereznay, established themselves as the pair to beat in the first week of the four-event championship, with races in Bahrain, Vietnam and China testing them in a variety of tracks.

A new qualifying format, mirroring that used by Formula One, saw both drivers book a place in Q3: a respectable performance put Daniel in P3, with Jarno in P5 as the top five were separate by less than a tenth of a second.

Team Manager, James Doherty, elected to split the drivers’ strategies for the race, Bereznay starting on the soft compounds as opposed to Opmeer on mediums. As the lights went out, Bereznay executed his strategy to perfection by taking the race lead with AlphaTauri’s Joni Törmälä following close behind. Bereznay maintained his net race lead after pitting for mediums as Opmeer went further into the race before pitting for softs.

With the raw speed of both driver and tyre, Opmeer quickly closed in on the leaders and dispatched Törmälä for second, before a position swap between the two Alfa Romeo Racing ORLEN F1 Esports Team drivers. The resulting one-two finish, with Opmeer leading Bereznay, was only the first such result since 2018, when title winners Mercedes locked out the first two places in a race.

The Hanoi circuit in Vietnam was a completely new experience for Formula One, with the Esports Series visiting the country ahead of their real-life counterparts. Qualifying proved to be incredibly competitive as most teams delivered strong laps earlier in the session.

Unfortunately, Bereznay fell victim to traffic on all of his qualifying runs and was knocked out in Q1, starting P18. Jarno Opmeer narrowly made his way into Q3, just a tenth clear of the cut off: despite the scare, he went on to produce the team’s first front-row start of the season with second place on the timing sheets. A post-session penalty to Renault’s Nicolas Longuet saw the Dutchman promoted to pole position.

Out-of-position Bereznay started on mediums, while Opmeer opted for the soft compound in order to make a break at the front. Opmeer lost a position to David Tonizza of Ferrari at the start, slotting in behind the 2019 champion, as Bereznay made up a few positions after a chaotic opening lap with no shortage of incidents throughout the field.

There was plenty of position-swapping in the opening stages, and after the pitstops Opmeer fell briefly to fourth, quickly reclaiming a podium spot after passing Renault’s Fabrizio Donoso: he then maintained this position until the flag finishing only half a second behind race winner Tonizza. Despite his efforts, Bereznay couldn’t use his softs to full effect due to cars ahead of him having slipstream and DRS, coming home in p15.

With @FormulaDani not far behind, this 1-2 finish was a great sign of things to come 🙌👏

Entering the final track of event one, China, both drivers made it comfortably to Q3 for a chance to fight for pole position. At the flag, it was a one-two for Alfa Romeo Racing ORLEN F1 Esports Team, with Jarno just narrowly edging Daniel, both drivers the only ones to produce a 1:28.1 in the session.

As in Bahrain, the drivers split their strategies: Opmeer, starting from pole on the mediums, had a slow getaway as Bereznay, Marcel Kiefer and Frede Rasmussen, on soft, displaced him. The Red Bull pairing performed an aggressive undercut strategy, Bereznay re-emerging from the pitlane one place behind Kiefer.

Jarno Opmeer, on the alternate strategy, continued to deliver a very consistent pace as he went deep into the race and pitted at the end of lap 13, resulting in him returning to the track in a net P6 – with an intimidating task ahead of him.

He quickly dispatched two cars within a few corners and closed in on the leading trio. A vital move around the outside Rasmussen at turn four promoted him to third, before a perfectly-timed swap with Daniel placed Jarno within reach of Kiefer. With two laps remaining, the Dutchman passed the Red Bull with the aid of DRS to win his second race of the season.

Alfa Romeo Racing ORLEN F1 Esports Team rounded out the first event as the only team to have both drivers on the podium within the three rounds. This incredible performance placed the team firmly into the lead of the Constructors’ Championship with 98 points, 29 ahead of Red Bull Racing. Jarno Opmeer leads the drivers’ standings with 65 points, only 10 short of a perfect total, with Daniel Bereznay in third with 33 points.

Jamie MacLaurin, Esports Team Principal: “The boys were superb from start to finish. I’m so pleased that all their hard work in the off season is starting to pay off. It’s important to remember, however, that this is a long season, and we must remain focussed on continuing on this rich vein of form.”

James Doherty, Esports Team Manager: “The drivers have put in a sensational performance from moments of extreme difficulty and the pressure of having arguably the most competitive field in virtual racing history. The event couldn’t have gone much better, but we will never underestimate the competition and look to take away the things we can improve even more for the future. I am just very proud of our drivers and team at this time.”

Daniel Bereznay: “I am so pleased for our team after all the hard work and preparation that has gone into this. After suffering a very bad qualifying at Vietnam, I was extremely determined to help the team score big points for the championship and we did this. The work does not stop as we look to continue this momentum into event two.”

Jarno Opmeer: “If you told me I would have two wins and two pole positions after the first event, I wouldn’t have believed you. I would like to thank everyone in the team for making this possible from James, Jamie, Dani, Dominik and Ethan, and Alfa Romeo Racing ORLEN for their continuous support. The focus quickly shifts to event two as the season is far from over.”