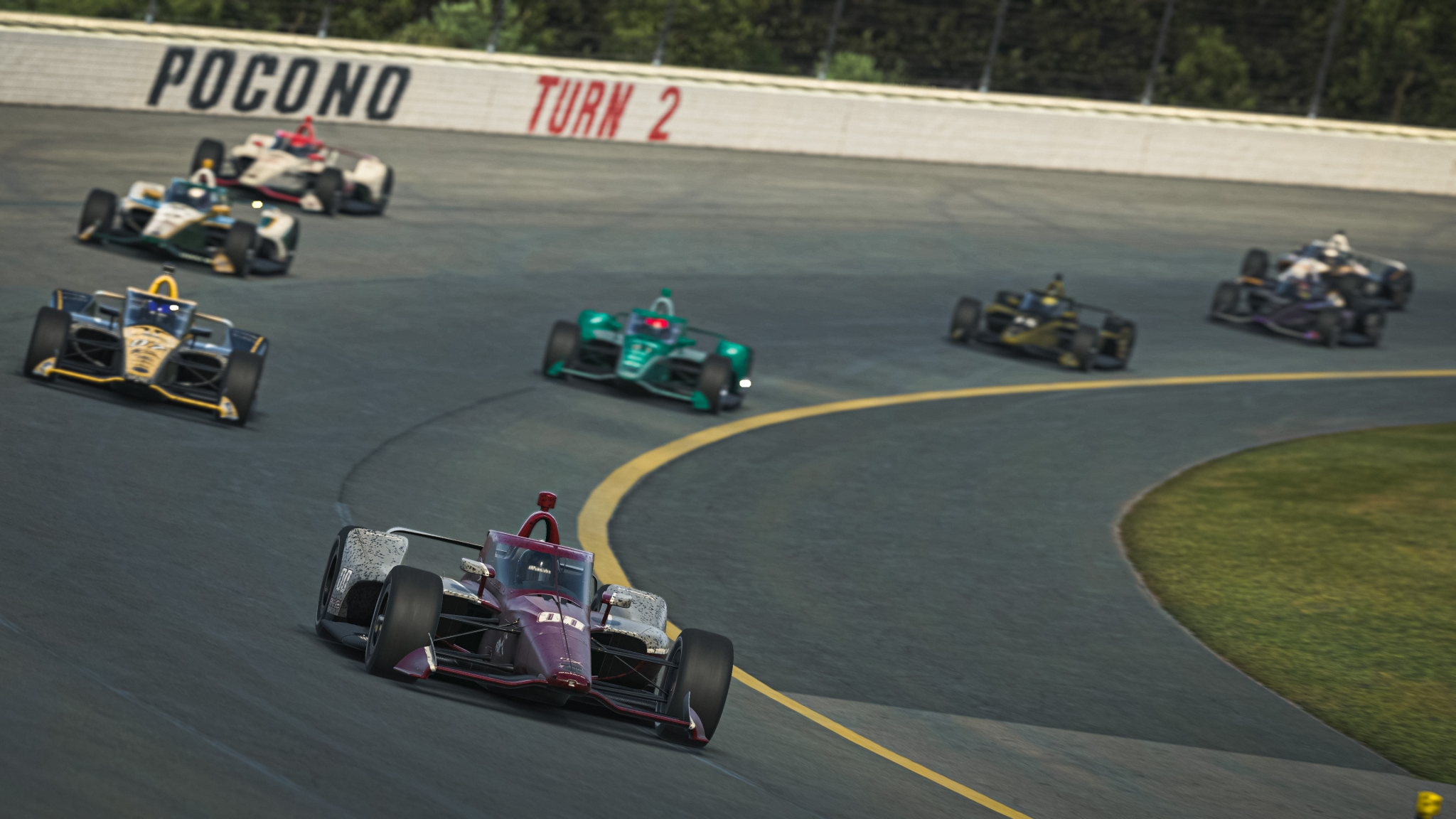 For a moment, it appeared nobody had saved enough fuel to make it to the end of the HyperX Pocono 200.

And then, Mike Rigney appeared.

The second year driver led a train of cars that, until the final lap, had been non-factors, stunning the field by stretching fuel further than anyone thought possible, and capturing his first win in the Lionheart IndyCar Series presented by First Medical Equipment.

“That very last lap, my spotter said go,” Rigney said. “That was all my spotter. He was telling me when to go, when to coast or ride or hold position. Sam Crowe won me that race.”

Rigney beat Scotty Johnson, Adam Frazier and Bart Workman across the by just under three seconds. None of the four started higher than 28th.

“I have no words, I’m truly speechless,” Rigney said. “This is Lionheart. There’s not a driver in this field not capable of winning a race. It’s an honor to even be here.”

The chaotic last lap was set up by a crash on lap 49 between Ken Hacker and Samuel Reiman.

A split strategy unfolded, with 10 cars staying out, led by Joshua Chin and Chris Stofer.

Other top ten stalwarts, including Jason Galvin, Adam Blocker, Andrew Kinsella and Brian Yaczik chose to pit when pit lane opened, while others, including Rigney, Johnson, and Jake Wright, chose to pit on the final lap of the yellow.

With an estimated fuel window of 27 to 28 green flag laps, the race to lap 80 and the checkered flag would be about a combo of fuel saving while staying within striking distance, while the top 10 counted on another caution.

As the cars that stayed out peeled off to pit road under green, all eyes turned to Galvin, who rocketed to the front, opening up a five second lead while clearly giving up on fuel conservation.

“I knew I wanted to be the first of the cars that came to pit road, and I also knew that meant not making it,” Galvin said. “I figured we’d get a yellow as the tires wore down. It just never came. I don’t regret it.”

As Galvin came to pit road with three laps remaining, Frazier inherited the lead. Blocker and Kinsella continued to try and use each other to save fuel.

A game of musical leaders ensued, as Frazier backed off, allowing the Adrenaline teammates around. Blocker and Kinsella then backed off, turning the lead over to Yaczik. As the white flag flew, Yaczik’s car sputtered.

And that’s when the chaos kicked into full gear.

Rigney jumped to the lead in turn two, as Kinsella and Marc Cohn both ran out of fuel and began costing. Yaczik went into full coast mode seconds later, as did Wright, allowing Johnson, a recovered Frazier and Workman around.

As everyone waited for Rigney to run dry, the field looked on in astonishment. 20-plus drivers couldn’t make the numbers work, but Mike Rigney did.

“I started saving right away from the first lap of the restart,” said runner-up Johnson, whose only career Lionheart win came in similar fashion. “I thought I was good to go, and then everyone started pitting. I lost the draft and thought I’d never get there. I would’ve been happy with a top ten. And then the last 200 yards, I just started flying by slow cars. I couldn’t believe it. The car started to sputter coming to the flag.” 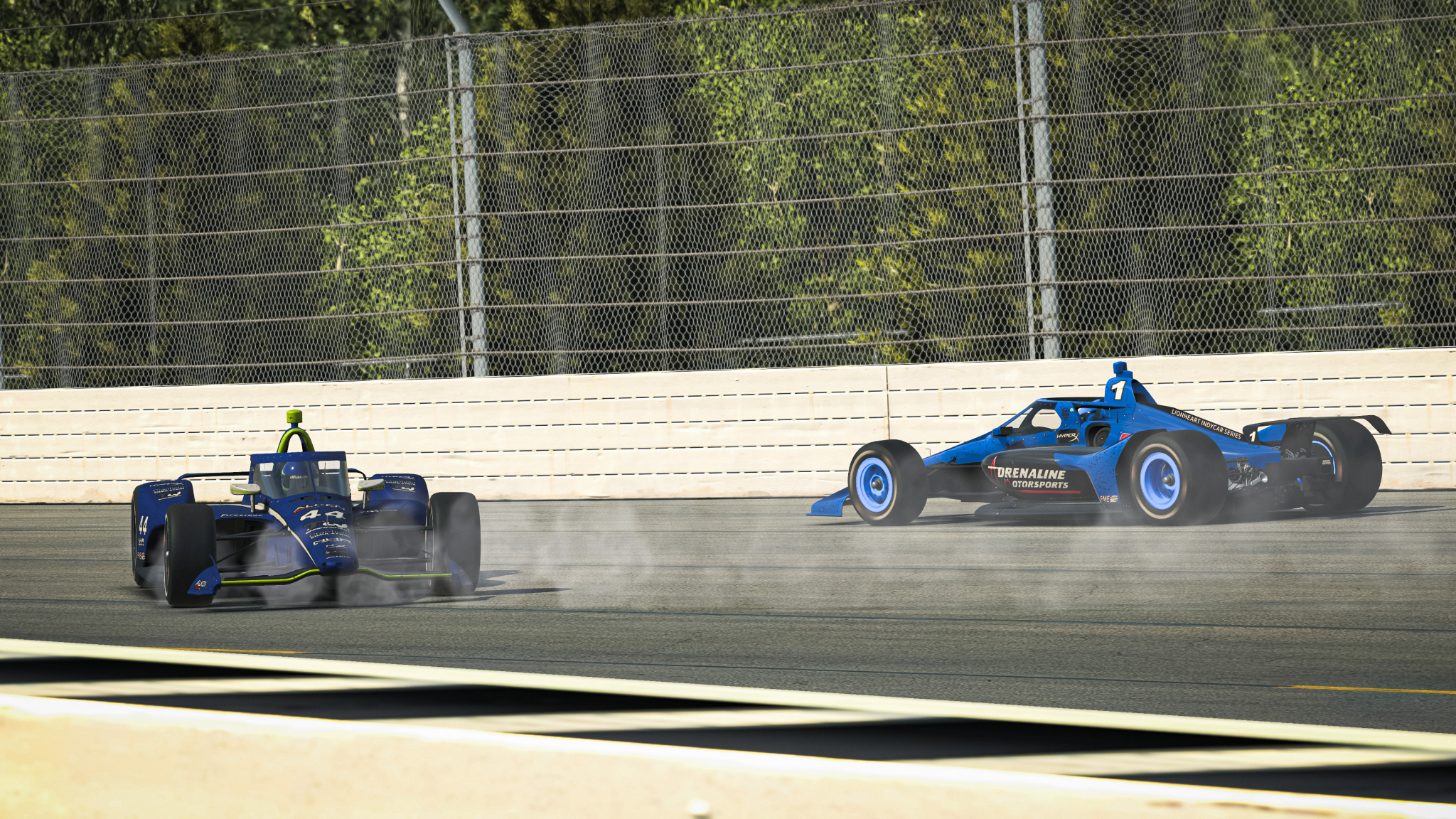 Blocker managed to hang on for fifth, a crucial points finish considering the absence of championship leader Sage Karam, and the mid-race crash of Connor Harrington.

Blocker was penalized after the race for the Harrington incident, which happened exiting turn one, and will start at the tail of the field in the next race along with Hacker and Dustin Wardlow, who were also both penalized.

On lap 45, Harrington, on older tires, clipped the apron in turn one. As he exited turn one, race officials determined Harrington left room to the outside for faster cars, but Blocker made contact with Harrington’s right rear, sending Harrington into the inside wall.

As a result, Blocker closed to just 42 points out of the championship lead, although he remained in fourth. Harrington sits in second, 33 back of Karam. Kinsella, who faded to 24th while coasting around, is third in points.

The IndyCar series will pay tribute to longtime title sponsor First Medical Equipment, an Iowa-based medical supply company, with the FME Victory Lap Celebration at Iowa Speedway. The race can be seen live on the iRacing eSports Network at 10:35 p.m. EST on Wednesday, August 26.