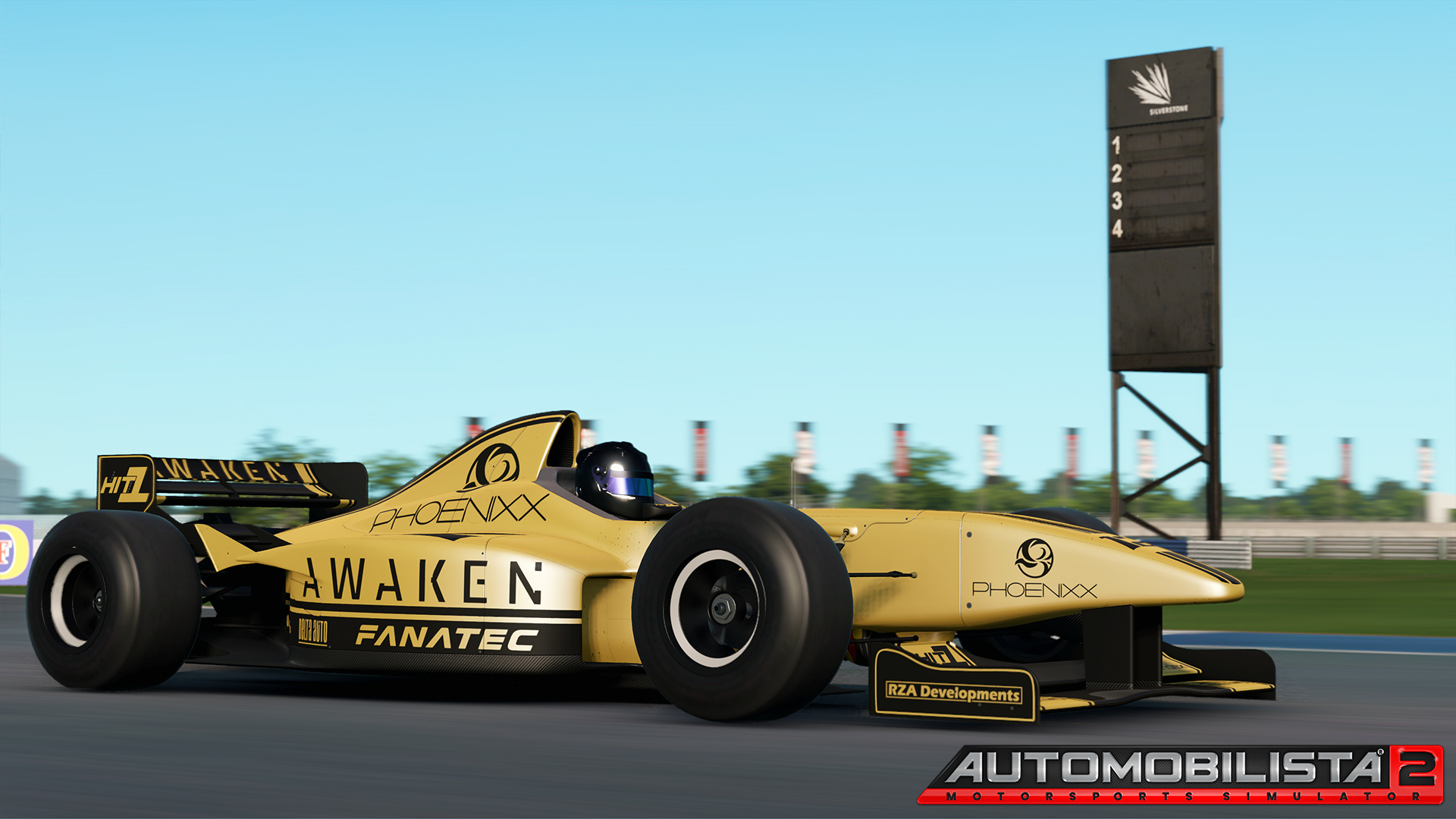 Reiza have shared their July roadmap for Automobilista 2 and some of the changes that are coming soon are incredible! New tracks, new cars, new fixes – the lot!

We are now one month into Automobilista 2´s release and we can´t overstate what a meaningful milestone this has been for Reiza. Those who have been following us will have an idea about the bumps we have had on this road, including a sort of game engine limbo until the opportunity to work with Slightly Mad Studios and use their Madness engine came along.

From the moment we got our hands on this engine in October 2018 until release day in June 2020 there was just 20 months to do everything – learn a new engine, get a grasp on their tools, figuring out new graphics, audio, physics and UI pipelines, develop the skills and hire people to work on stuff we previously had no experience in – and then go about the business of building a game with over 50 tracks and cars!

While the release has been important, we can´t argue it´s been flawless – the game still has rough edges and we´re not oblivious to the fact it´s restricting enjoyment of the game for some users. We´re frustrated ourselves with some of the troubles we had in the final stretch of Early Access so in these first weeks we have remained commited to play some catch-up.

One of the things we´ve found lacking and have since been working towards is assembling all the information people need to get into AMS2, understand what it is about and get it to work well – the new official website should hopefully help offer that in a more cohesive manner, with more info about the game content, configurations and a fairly detailed roadmap for what is still to come.

More important than that of course is the work on the game itself, and here too we´ve been pushing hard – we have already released our first update last week, and we´re completing some more substantial work for the one coming next week (estimated to August 7th). Some of the highlights:

Championship Mode will now allow for different championship series, customizing session lengths and saving your progress in between sessions. This is still the bare minimum, with lots of further features still to be added to this game mode in the coming months.

For the next update we are also simplifying the track limit system to work more like we had it in AMS1 – a customizable number of warnings for each time you exceed the track limits, after which driver is given a drive-thru penalty. At least provisionally the option to pay penalites slowing down will be restricted to giving back positions gained by going off track (and even then with some further fine-tuning to better detect cars that are not up to race speed). We´ll continue to work on the original system with the intent of adding it back later on as an alternative.

We also continue working hard on the AI and have some good developments in store for the next update. As with the penalty system, we are simplifying some of their logic in order to ensure some better consistency, particularly in racing conditions where extra functions can still lead them to react unpredictably.

We´re also experimenting with some new functions for AI cars to take defensive lines going into corners and use wet lines in the rain, some preliminary work on these fronts may already make to the release next week

The addition of more elaborate AI driver personalities is also underway and should help the AI opponents in each of the series in the game behave and perform more appropriately for the racing style demanded in the series.

Along witth these, all other areas in the game will continue to warrant and receive continous development throughout AMS2 dev cycle as they have so far.

Work on the content side evolves in parallel to development of the game core, and here too we are happy to say we have some quick catching up inbound.

Silverstone Circuit will see back-to-back Grand Prix this weekend and the next so it seems an appropriate time to celebrate this classical track by releasing it in between this unique event – the track along with several historical variants will be released next week together with the game update.

Silverstone will be the 2nd DLC pack for AMS2 and like Hockenheimring it will feature this classic track in four versions – 1975, 1991, 2001 and 2019. These versions of the track are as different from each other as the cars that raced on them in each of these eras, but they are all unique, flowing and challenging in their own way. The 1991 version is one of my personal favorites and we´re specially proud to be bringing it to AMS2 – probably the first time the track has featured in a sim since Geoff Crammond´s original F1 Grand Prix!

Unfortunately the historical tracks are still due an art pass to bring them up to the very high standards our track team has been setting as of late, so we can´t preview them yet. They did let me include a lap of the modern version however so you can come along with me for a ride in VR to check how it´s shaping up:

We´ll post similar videos of the historical versions throughout the next week in preparation for the release.

Along with Silverstone, we are releasing 4 new cars in two classes, and no less than 3 of them are official classic Grand Prix cars – the Lotus 49C and Brabham BT26 will join the similarly spec F-Vintage Gen2 series, enriching the class with a couple of genuine articles. 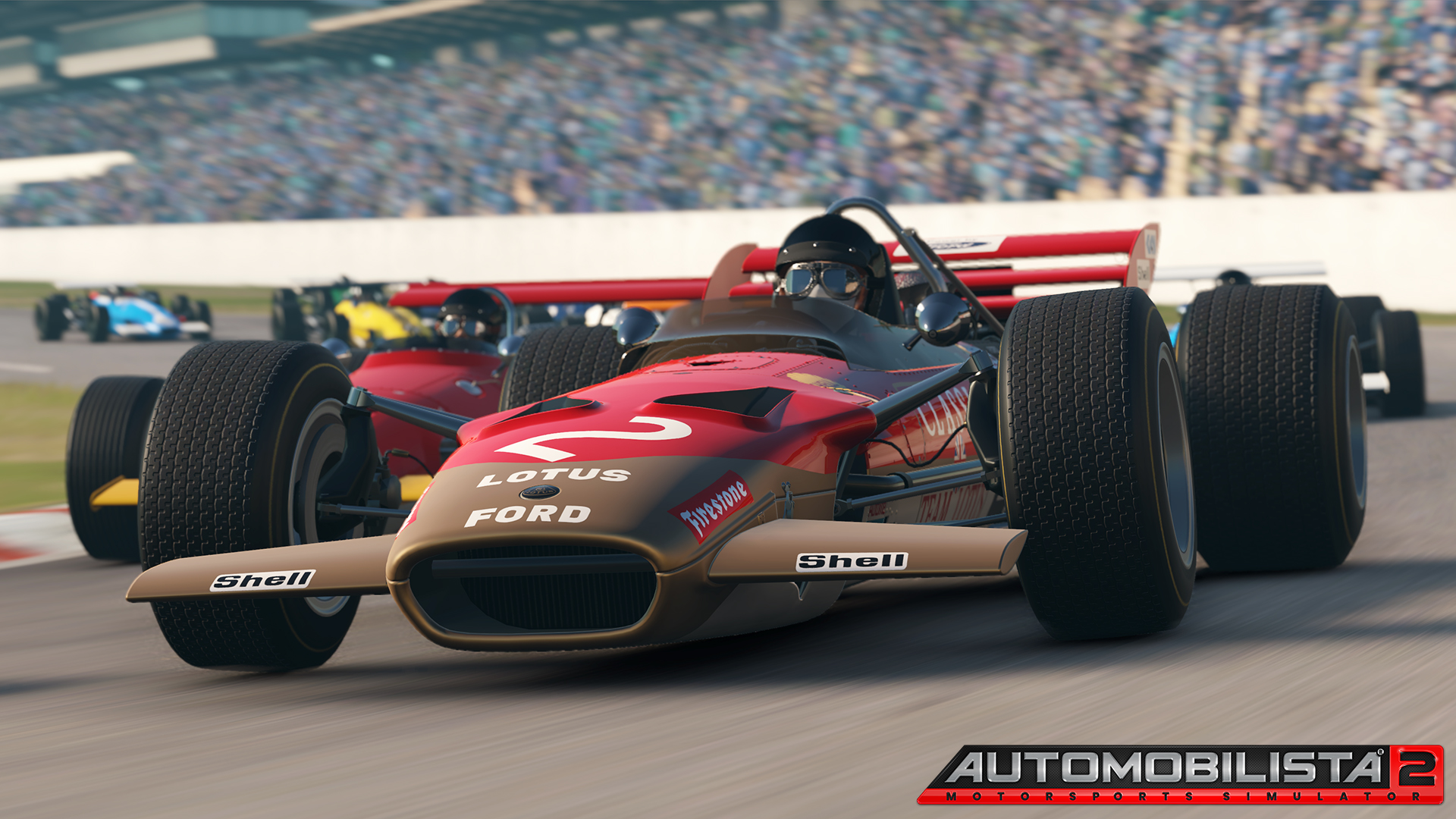 Another class is being added as the Formula V10 Gen1 – an earlier version of its Gen2 counterpart, with wider track and slick tyres and a dream ride through the 2001 version of Silverstone. 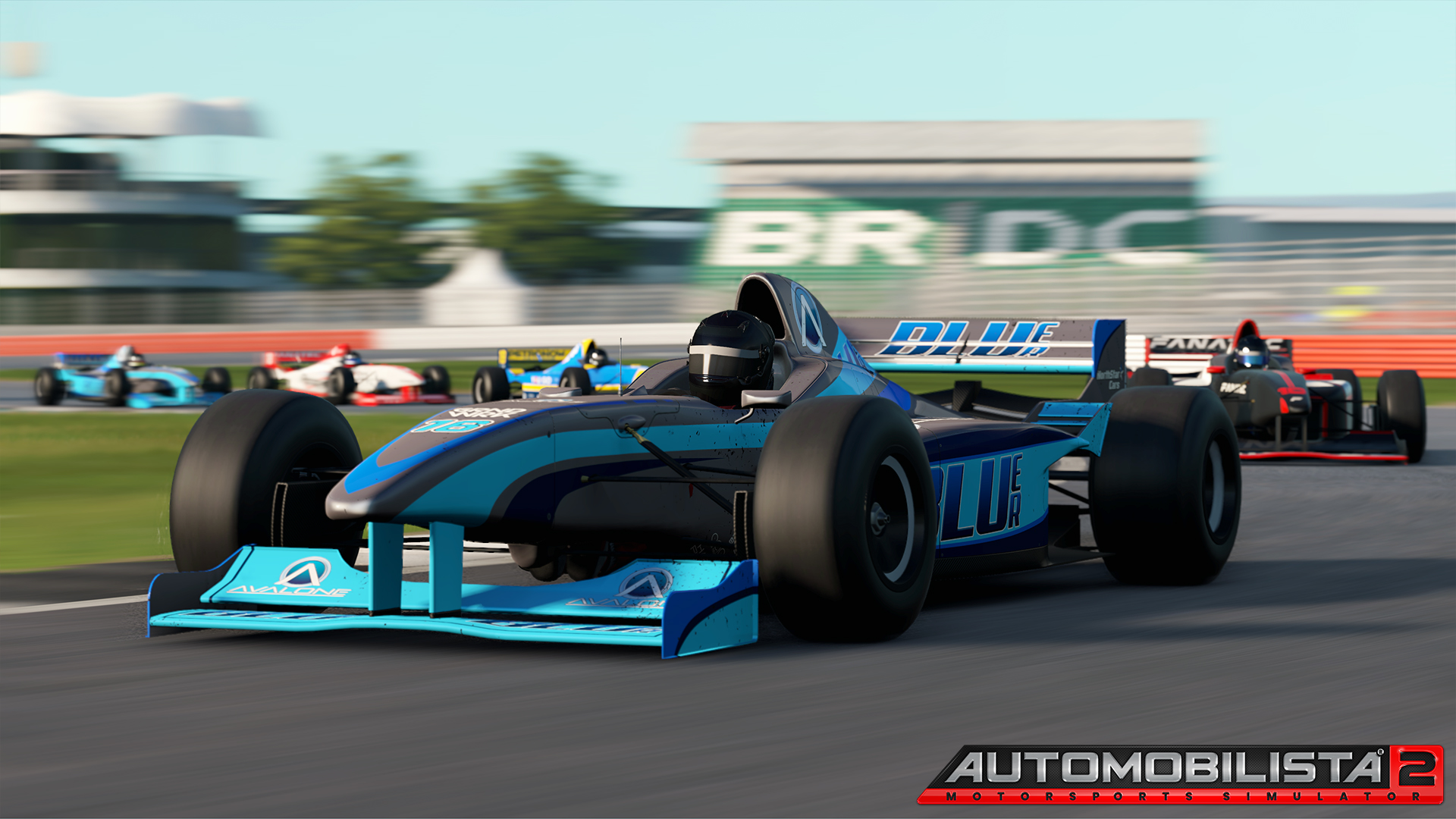 Along with the new F-V10 we have another classic F1 car, but this one we´re gonna keep under wraps a little longer as it brings a few interesting things that is worth elaborating on

With these and many other models already licensed we can confidently assert that AMS2 will have the largest ensemble of classic Grand Prix cars in a racing sim, and with the right tracks to go along with them.

The Germans Are Coming…

With the addition of Silverstone to a roster that already features five other British tracks along with Lotuses, Mclarens and Ginettas, we continue to make steady progress into the cream of British motorsports, and we´re “chuffed to bits” about that as there are few countries which can rival the UK for sheer quality of their motorsports culture.

There is another one however that just might – with the release of the Hockenheimring last week, we have marked the start of our advance into another “theatre”, as Germany is also soon to be well and truly represented in Automobilista 2!

Let´s start with the cars: some of you will know and have been claiming for the classic German touring cars we alluded to a few months back; unfortunately licensing hold-ups under the new world order have truly messed up our release schedule, but we are happy to confirm we´re in the final stages of our licensing agreements with both BMW and Mercedes-Benz, which will see some brilliant German machinery arriving to AMS2 in the coming weeks and months. 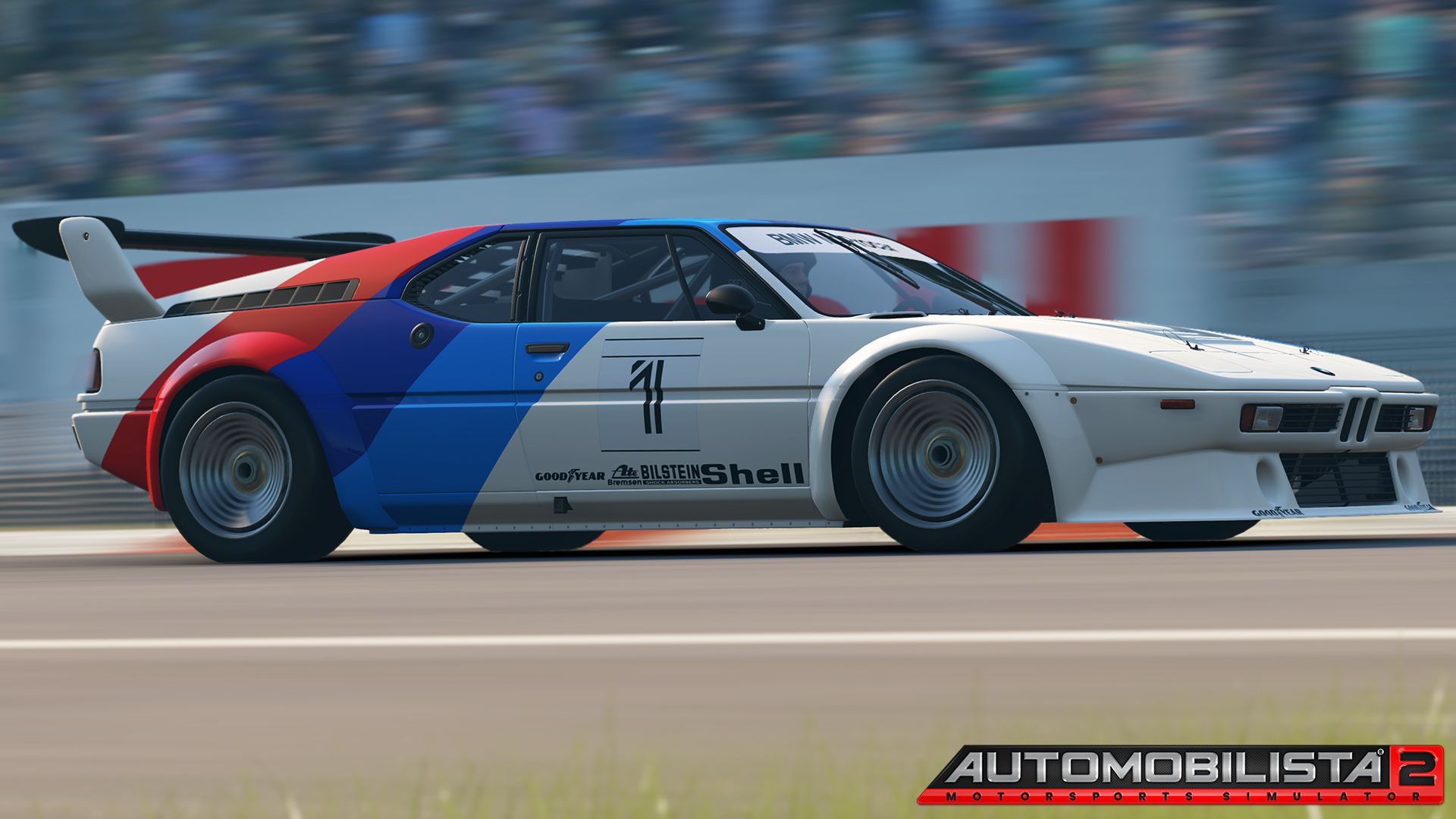 We´ll start with the classics: the BMW M1 Procar will be the first to arrive, and soon after the M3 E30 along with the Mercedes 190E Evo2 for some classic touring car action. Plenty of more of these to come, but let´s not spoil it all yet

Later on the two brands will be represented in our GT3 / GT4 pack with their respective models, and we will have at least one more German brand to add this line-up soon enough…

Unfortunately since the conclusion of these deals are fairly recent developments we haven´t been able to get more previews cleared for this Dev Update, but in any case we wanted to finally confirm them as they have been dragging for a while now, and also confirm these and many other models are already in-game – so while these are unlikely to be make it in any of our August releases, we should get some very interesting line-up of cars already by September and October.

And to make it more interesting, we confirm that all the cars mentioned in this dev update will be free additions to the base game.

…And to the Green Hell We Go!

Naturally if you are going to do German motorsports there is no escaping the Green Hell, so we´re again extremely excited to confirm that the Nurburgring will also be coming for Automobilista 2 in the near future – intially with the Nordschleife, GP and 24h layouts, with more variants to be added over time.

The Nurburgring will be the 4th Track DLC Pack, joining Hockenheimring, Silverstone and Spa. Now there´s just one more to be confirmed before the end of the year…

So all this hopefully makes everyone as excited about the future of Automobilista 2 as we are – there is a lot of good stuff still to come, and a vision to bring it all together in a way that will make AMS2 a truly unique experience!

As we keep working towards that and in consideration of the fact some of the premium cars haven´t made it into the game yet, we have elected to stick with the current pricing from the 2nd half of the Early Access period – the bump will come when the cars are added though so don´t wait to long to join this train…

That´s all we have for this month – quite a bit wouldn´t you say? See you all again next week for update time and some high speed fun with Silverstone and Classic GP car!