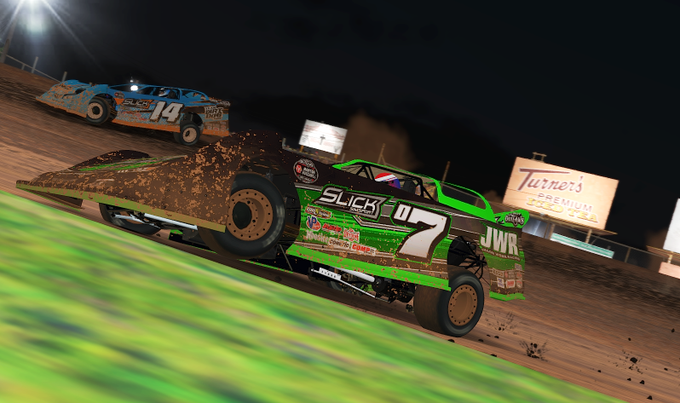 Another exhilarating night of World of Outlaws running on iRacing saw Hayden Cardwell rise to the top.

Ever since it dropped on iRacing last year, Lernerville Speedway has established itself as one of the toughest tracks to drive in any dirt oval car. Whether you’re just getting started in a street stock or one of the top 35 drivers in the world who makes it into the iRacing World of Outlaws Morton Buildings Late Model World Championship, running 50 laps at a high level without jumping the cushion and sliding out into no man’s land is a challenge for even the best of the best.

Somebody clearly forgot to tell all that to Hayden Cardwell.

Cardwell became the first driver to score a repeat victory in iRacing’s premier dirt late model series for 2020 on Monday night, holding off former series champion Blake Matjoulis to sweep both of this year’s Lernerville events. It wasn’t the six-second throttling of the field from weeks before, as the first race went caution-free and a series of major incidents led to multiple cautions this time around, but it was still a comfortable victory of more than a second.

Top rookie Dylan Wilson qualified first, won his heat, and led 16 laps before outside front row starter Cardwell was finally able to wrestle the lead away—shortly after a massive frontstretch wreck ended Jacob Fields and Austin Carr’s nights early. Wilson would eventually fall to fourth, as Matjoulis got past shortly thereafter and fourth heat winner Kendal Tucker finally wrestled away the third spot in the final laps after a spirited battle.

Fellow top rookie Devon Morgan maintained the final spot in the top five, beating out championship front-runner and third heat winner Evan Seay. Dylan Houser and Davin Cardwell converted their transfer spots from the B main into seventh and eighth place, respectively, as the top position gainers on the night.

The second half of the iRacing World of Outlaws Morton Buildings Late Model World Championship season kicks off next Monday at Kokomo Speedway. As always, the race will air live on the iRacing eSports Network on Facebook, Twitch, and YouTube at 9PM ET.