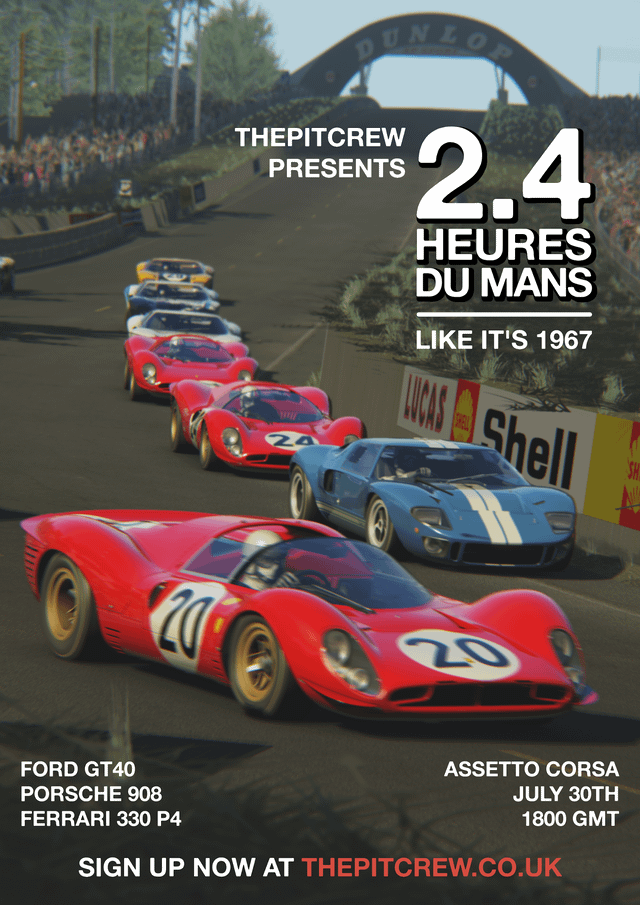 Ah, the 1960s. An era much remembered for the space race, convoluted politics and The Beatles. An era much reminisced for the sleek and elegant artwork that graced roads and race tracks alike and where the racing was tough, gruelling and a matter of life and death.

The folks over at The Pit Crew are throwing it back to 1967 with the 2.4 Heures du Mans on the Assetto Corsa platform.

The race, which takes place on 30th July, sees three of the eras finest sportscars battle it out one more time. Featuring the Ford GT40, Ferrari 330 P4 and Porsche 908 hurtling around the classic Le Mans circuit, this event is certainly one for the diaries.

Le Mans back in those days was a completely different beast. The Mulsanne was one long shoot, no chicanes, just an avenue of trees and hay bales. A quick flick through the archives will show you why the era is hailed as the golden age of racing.

The event will use Assetto Corsa’s DLC and the 1967 Le Grand Circuit mod by Terra21.

“LeMans 1967, you’ve probably heard of the great battles between Ferrari, Ford and Porsche, well do we have a treat for you. The ability to live these battles in full glory, over two and half hours of intense battling between some of the most historic cars in the world.

We want you to be part of the action, so we’re allowing everyone who has all the DLC for Assetto Corsa to sign up, we’ll be taking all these cars around Le Mans, complete with hay bales, trees and plenty of other crash hazards. You too can experience just how much of an adrenaline rush it was to drive in the 60’s era of endurance racing!”

Event signups are currently full, but if you wish to signup us a reserve, you can do so here.

The event will be livestreamed on The Pit Crew’s official Twitch page which you can follow and keep an eye on the action here.