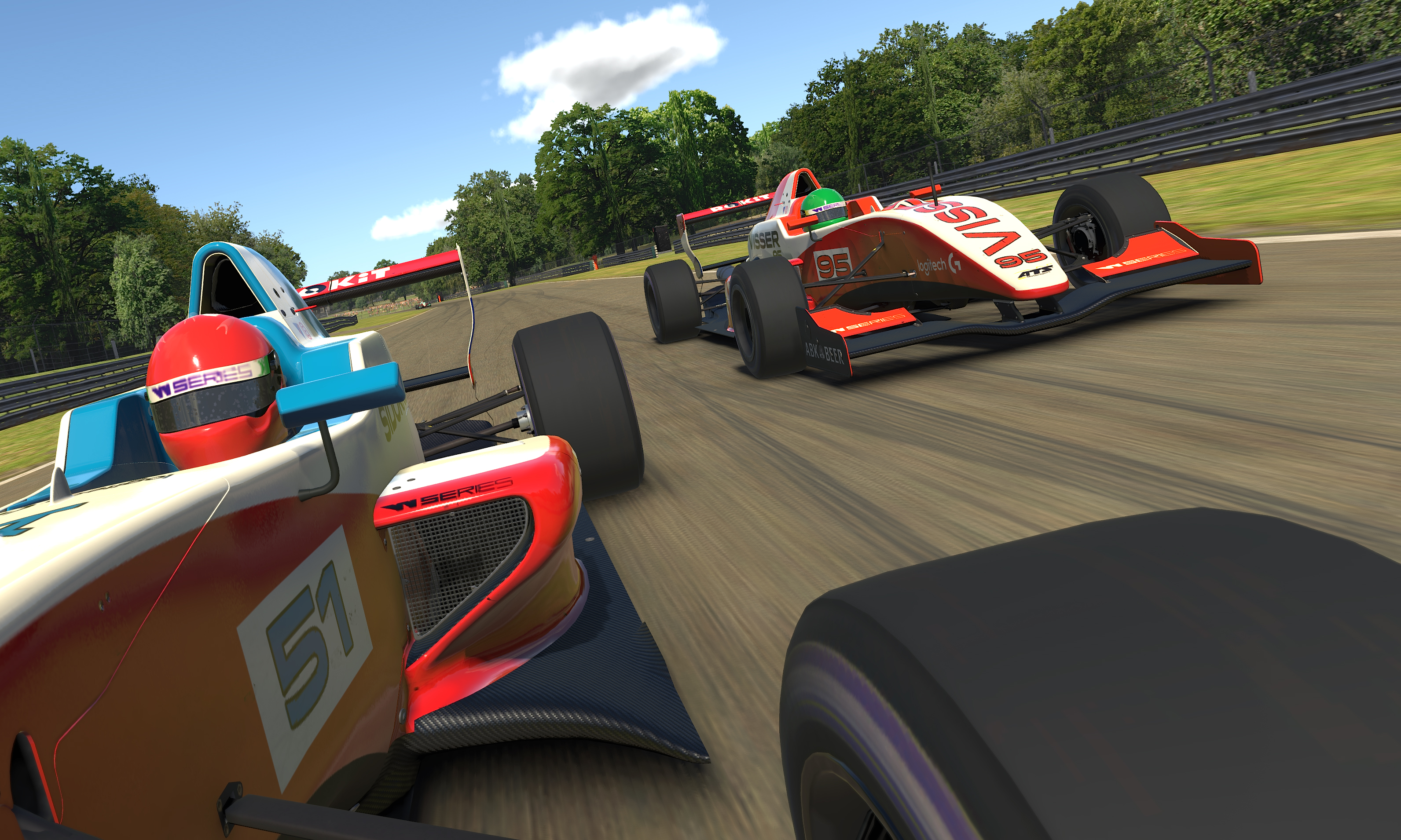 Irina Sidorkova won the final two of three races at Brands Hatch Grand Prix Circuit, Kent, UK, to keep up the pressure on Beitske Visser at the top of the W Series Esports League table.

A spin on the first lap meant Irina took no points from the opening race of round three, but the Russian recovered brilliantly, comfortably winning the reverse-grid race before overtaking Beitske and Marta Garcia on her way to victory in race three.

Irina earned a total of 40 points at Brands Hatch, 13 fewer than Beitske who extended her lead over the 16-year-old at the top of the W Series Esports League to 27 points after another consistent display. The Dutch driver, 25, won race one, climbed from last to second in the reverse-grid race and recorded the fastest lap in each of the three races to score 53 points – a record total for a single W Series Esports League round.

Caitlin Wood moved up to third place in the W Series Esports League table by finishing eighth, seventh and third for a total of 32 points, the same as Marta who went from seventh to fifth overall thanks to podium finishes in the first and third races. Alice Powell sits between those two in the League table – one point behind Caitlin and three ahead of Marta – after collecting 29 points at Brands Hatch, the scene of her on-track W Series victory last August.

The W Series Esports League table after round three is as follows:

Caitlin pipped Beitske to pole position by less than two tenths of a second, but Beitske took the lead at Paddock Hill on lap one. As the drivers climbed uphill to Druids, Irina spun, relegating her from fifth to 18th. Caitlin was in hot pursuit of Beitske in front, but the Australian dipped a wheel onto the grass at the end of the first lap, sending her down to 14th and promoting Alice to second. Less than six seconds separated the top five drivers at the halfway stage, but Beitske slowly pulled away from Alice. Marta completed the podium and fellow Spaniard Nerea Marti followed her across the line after holding off a strong challenge from Sarah Moore.

Irina started second alongside Miki Koyama on the front row and the Russian got a great start to take the lead before the first corner of the reverse-grid race. Several drivers were impacted by a collision at Graham Hill Bend, which allowed those at the rear of the field to make significant progress by the end of lap one when Beitske and Alice – who formed the grid’s back row – had made their way into the top eight. With 11 minutes remaining, Beitske overtook Abbie Eaton for sixth and, up ahead, Sabre Cook moved past Miki into second place. Tasmin Pepper came out on top in a wheel-to-wheel battle with Jessica Hawkins for fourth at the midway point. Beitske followed Tasmin past Jessica at the next corner, and was up to fourth with six minutes to go when she beat Tasmin to Surtees at the end of the Cooper Straight. With four minutes left, Beitske took third from Miki and set about catching Sabre who was three seconds up the road. She overtook the American for second with just over one minute on the clock, but Irina was out of reach.

Beitske took pole position by less than one tenth of a second from Marta, but just as Beitske did in race one, Marta made the better start from second on the grid and led through Paddock Hill. Irina retained third and that trio were nose-to-tail during the first few laps. The order changed with 12 of the 20 minutes remaining when Irina passed Beitske after a thrilling wheel-to-wheel battle lasting four corners. Beitske regained second place on the next lap as she went on the inside of Irina at Druids. With six minutes left, Irina overtook Beitske again and, one minute later, the pair went past Marta on the exit of Paddock Hill. Beitske was now right on leader Irina’s tail, but with less than two minutes to go, Beitske lost the rear of her car approaching Clearways and spun into the barriers, losing her front wing. She limped home in fourth, behind Caitlin, leaving Irina to take her second straight Brands Hatch victory.