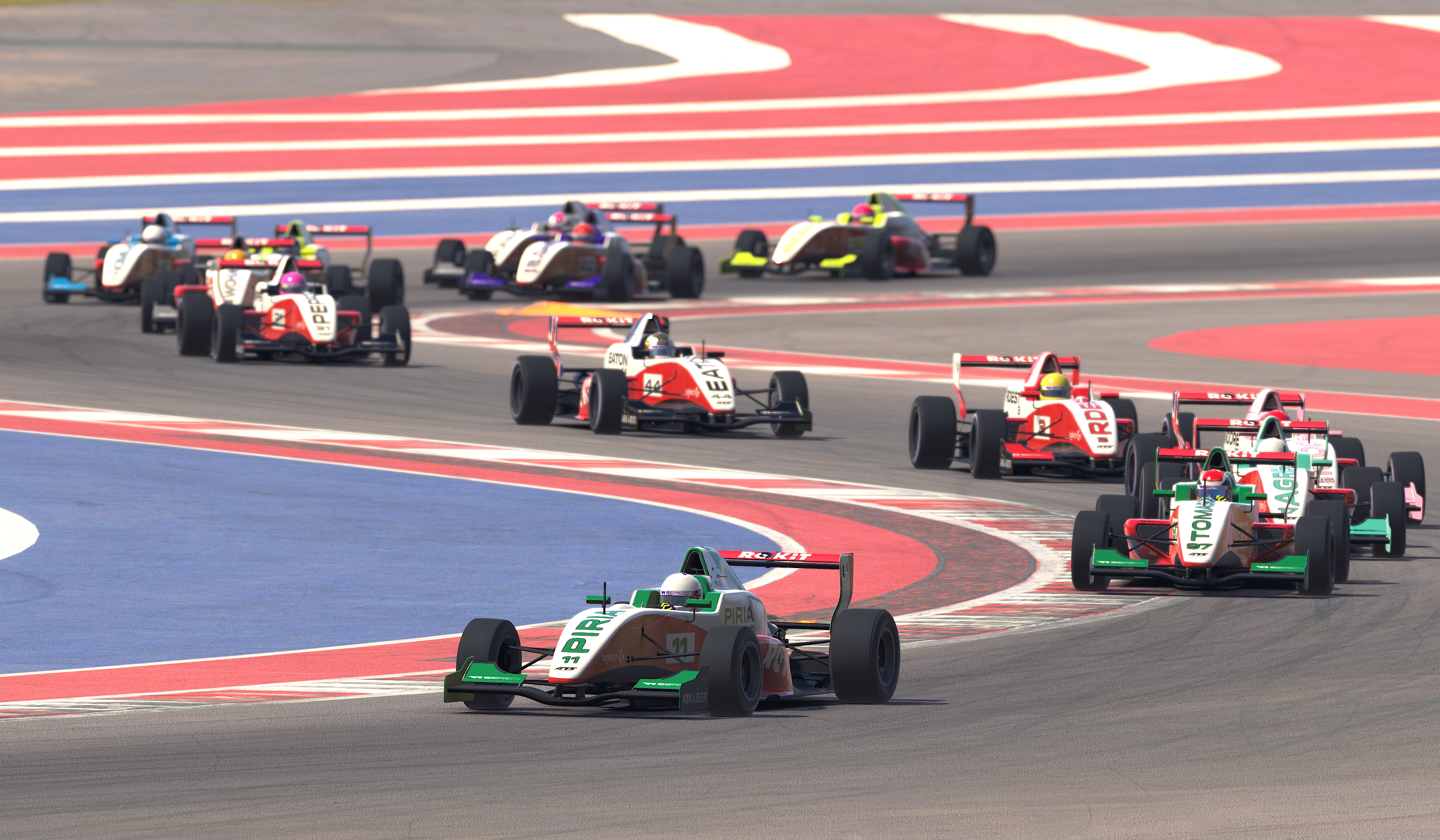 The second week of the W Series Esports League saw drivers hit the track again, this time at the virtual  Circuit of the Americas in Austin, Texas.

Beitske Visser carried her impressive form over from Monza into this week with a further two wins to add to her names following dominant performances in races one and three. For the second week in a row, Emma Kimilainen won the reverse grid race with drivers tangling behind her allowing for an easy run to the flag.

After the conclusion of round two, Visser holds a 14 point lead in the championship over rookie Irina Sidorkova while Alice Powell emerges from the tightly fought midfield pack to jump into third place in the standings, 42 points off Visser’s tally of 100 points.

Visser noted that here performances are all down to practice, having been in the sim most days over the past two months when she initially took delivery of her rig.

Alice Powell, who fought her way to two podiums on Thursday, came on leaps and bounds over her best finish of fifth in Monza. Powell, who seemed a lot more confident behind the wheel at COTA than Monza claims she practiced less than she did for Monza. The Brit puts her strong performances down to being better suited to the American circuit and was able to keep out of trouble for the most part.

Those that have been watching the W Series Esports League will already be aware of the race format – Race one and three are both decided by standalone qualifying sessions while the grid for race two is decided by reversing the entire race one result. The idea is to create a more level playing field, giving “slower” drivers an opportunity to make up some points and potentially earn a visit to the podium all while being hounded by the “faster” drivers, looking to get some more points in the bag.

As may be predicted with any revere grid racing, the result was chaos with those more experienced simracers in the cohort battled there way up the field with urgency. While drivers tripped over each other in turns 1, 11, 12 and the turns 13 through 15 complex, Alice Powell managed to slip through the sea of cars ending the race third, a fourteen place gain on her starting position. Visser meanwhile picked up damage strating from the back but still hauled her car to an impressive sixth adding to her points tally further.

In the Friday morning press conference, we asked the two drivers about the root causes of the chaos that we saw:

“In sim racing, there’s always going to be more crashing,” Visser replied. “You don’t have a restart button in real life so some drivers approach the two [sim racing and real racing] quite differently. I think that the netcode involved in simracing will also obviously make a difference when it comes to everyones internet connections, but that’s out of our control really.”

Alice Powell added “The fear factor that you have when driving isn’t necessarily there. If you look at the race in Assen last year [W Series ran an experimental non-championship reverse grid race], reverse grid racing is always fun but it’s certainly different to real life.”

In the real world, the W Series sees drivers swap cars and engineers after each round of the championship in an attempt to negate any advantage from a stronger car. The exception for that is should a driver crash their car, they run the same car in the next event and will feel the brunt of any damage done. In a previous interview, Powell has said that this rule was in the back of her mind going into last years race at Assen. Although the race didn’t count towards the championship, damage to the car certainly would impact you at the season finale.  This isn’t the case in the Esports League so there is really no disincentive to crash, other than the results themselves.

Incidents aside, we were shown yet again how good reverse grid racing can be. Perhaps F1 could take some notes?

The next round of the W Series Esports League sees the drivers take on Brands Hatch, a circuit where Powell won the season finale with favourite Visser rounding off the podium.