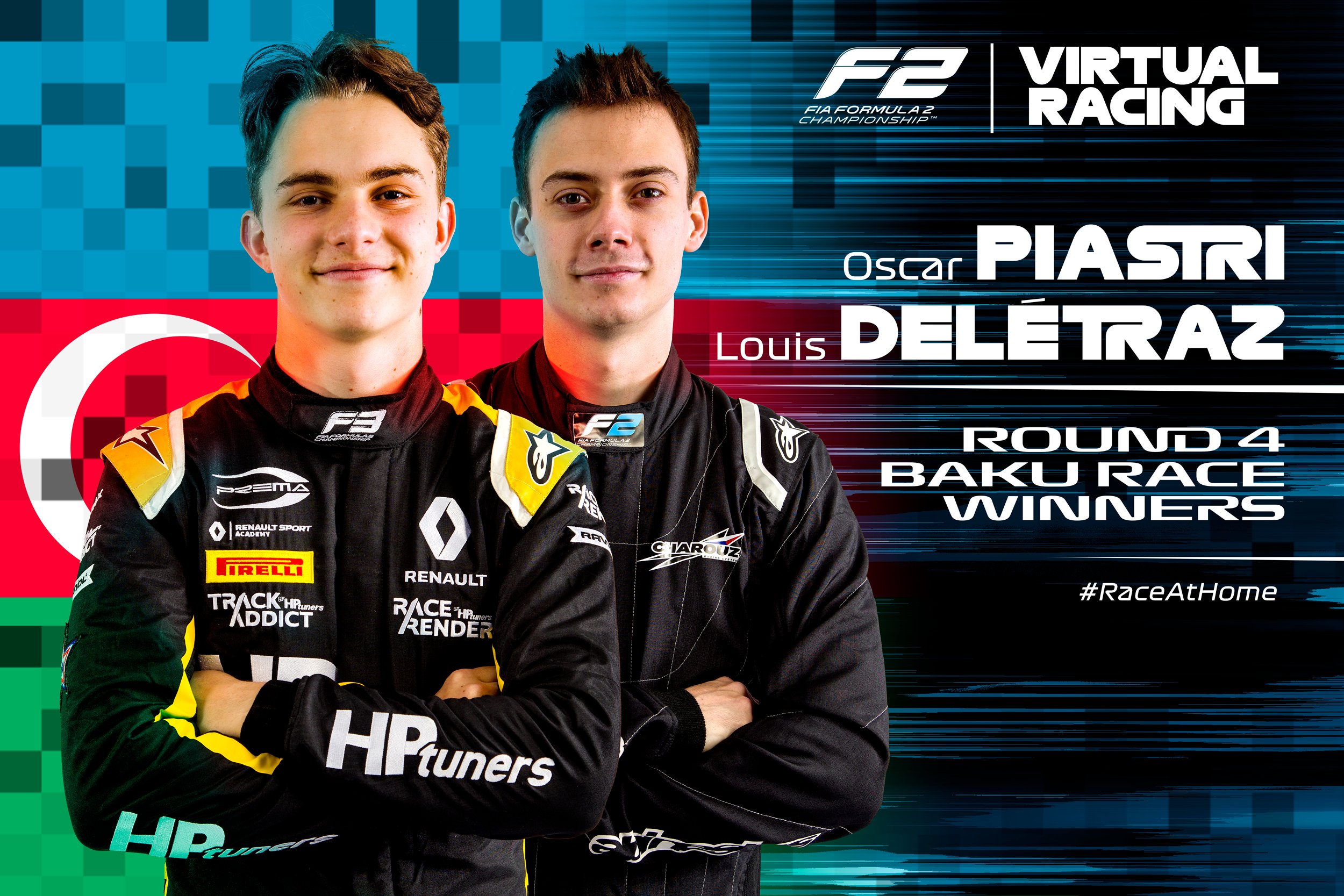 Formula 2 Virtual Racing concluded today in dramatic style as the 20-car grid battled hard on the Baku City Circuit in the fourth and final round.

PREMA’s Oscar Piastri stunned in his debut, clinching pole position and a dominant win in the Feature Race whilst Louis Delétraz took a second win on the line in an incredible finish in the Sprint Race.

Piastri made a clean start from pole position and kept ahead of Lirim Zendeli when the lights went out for the 15-lap Feature Race. Fellow newcomer Matteo Nannini made a strong impression starting from 3rd and kept the position at the start, but he rapidly came under threat from Jack Aitken who passed him at Turn 3.

Nannini fought back and reclaimed the position, whilst Arthur Leclerc cut his way through the field from the back of the grid all the way to 8th ahead of Guanyu Zhou.

HWA RACELAB’s Enzo Fittipaldi picked up the pace and passed Aitken for 4th, before the two engaged in a wheel-to-wheel fight which eventually resolved in the Brazilian’s favour. Behind, it was a bit easier for Leclerc to overtake Théo Pourchaire down the main straight for 7th as more drama took place when Zhou received a 5s time penalty for making contact with Roberto Merhi.

By Lap 3, Piastri enjoyed a 2.7s gap to Zendeli, as the Trident driver looked unable to match the Australian’s pace. Behind the leading pair, Fittipaldi closed in on Nannini, and the Brazilian tried a move around the outside of Turn 1, and then again in Turn 2, but the Italian hung on to P2.

The incredible fight resumed on Lap 5 as Fittipaldi managed a better exit of turn 16 to overtake Nannini in the main straight. The battling duo were then stunned by a charging Aitken who passed the pair in a bold move.

At the front, Piastri had built up a gap of 10s over Aitken after Zendeli pitted for Medium compound. The race leader pitted a lap later, handing the lead to the Briton; Leclerc meanwhile moved up to 2nd – 1.7s behind Aitken.

The Campos driver then pitted on Lap 7 along with the Monegasque racer. Zhou was handed the lead ahead of Pourchaire while Piastri was already back in P3 ahead of Zendeli; Nannini who was in the fight for P3 unfortunately got disconnected.

On Lap 8, Leclerc passed Aitken for P5, and the Briton tried to fight back in the second DRS zone but went to deep into the run-off area at Turn 3. When Zhou and Pourchaire pitted to switch from Medium to Supersoft, Piastri was back into the lead – 5.7s ahead of Zendeli. Fittipaldi was 3rd but already had a total of 8s of time penalty which meant that Leclerc, in 4th, had to stay close to the Brazilian to claim another podium finish.

Piastri was not to be denied today and flew to a maiden victory with an impressive 10s lead over Zendeli. Leclerc completed the podium after an incredible recovery from the back of the grid. Victor Martins finished 4th on his debut for ART Grand Prix ahead of Fittipaldi, Zhou, Merhi, Aitken, Pourchaire and Nannini. 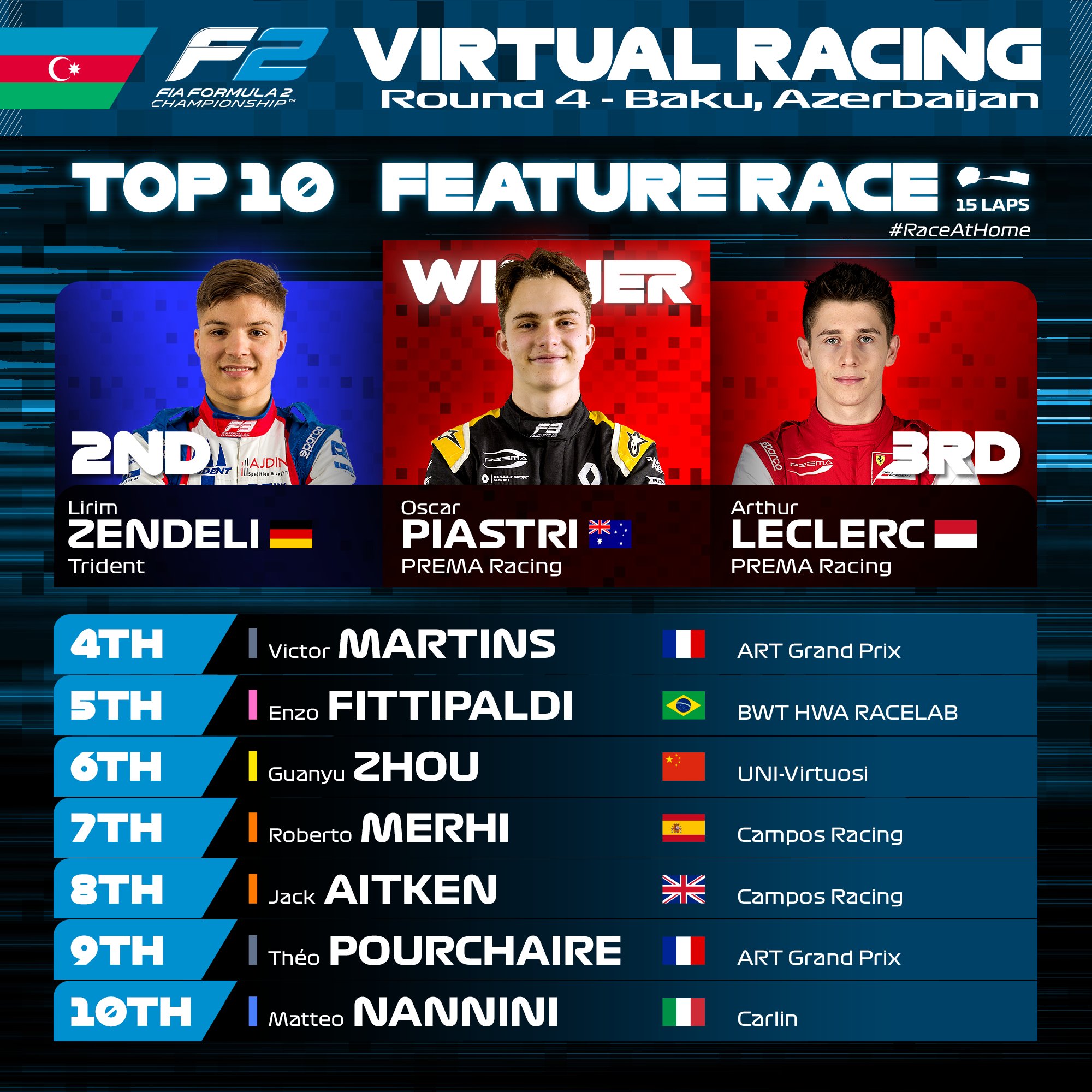 It was an all Campos front row at the start of the 5 lap Sprint Race, with Aitken kept the lead as Zhou moved up to P2. The opening corners were chaotic as multiple collisions sent a lot of the front runners at the back of the field, including Leclerc. At the front, Aitken spun out of the lead allowing Merhi and Enaam Ahmed to go through. Zhou dropped to 3rd ahead of Delétraz who had started P11 on the grid, but the Swiss was on a mission and quickly passed the Chinese driver.

On Lap 2, Merhi cleared away while Ahmed came under pressure from Delétraz. The Carlin driver yielded into Turn 1 losing P2 to the Charouz driver who then pushed hard to close in on Merhi, setting the fastest lap along the way.

Behind the leading pair, Zhou was all over Ahmed and the two made small contact in the main straight, but the Briton remained ahead. All eyes then turned to Merhi and Delétraz as the gap between the two was reduced to less than 1s.

On the final lap, Delétraz did not let Merhi breath, , but the Spaniard was able to defend well as he tried a first move down the main straight. Merhi was under attack again in the second DRS zone, but Delétraz could not make the move stick.

The Swiss driver seemed to be running out of road, but true to his spirit, he did not give up. It was a drag race to the line which eventually saw Delétraz taking the flag as Merhi spun following small contact. Zhou managed to pass Ahmed in the closing stages for P3; Juan Manuel Correa finished 5th ahead of Martins, Leclerc and Pourchaire.

This action-packed race concluded F2 Virtual Racing in style as the drivers will now train hard to be ready for the opening round of the 2020 season which will take place at the Red Bull Ring in Austria on July 03-05. 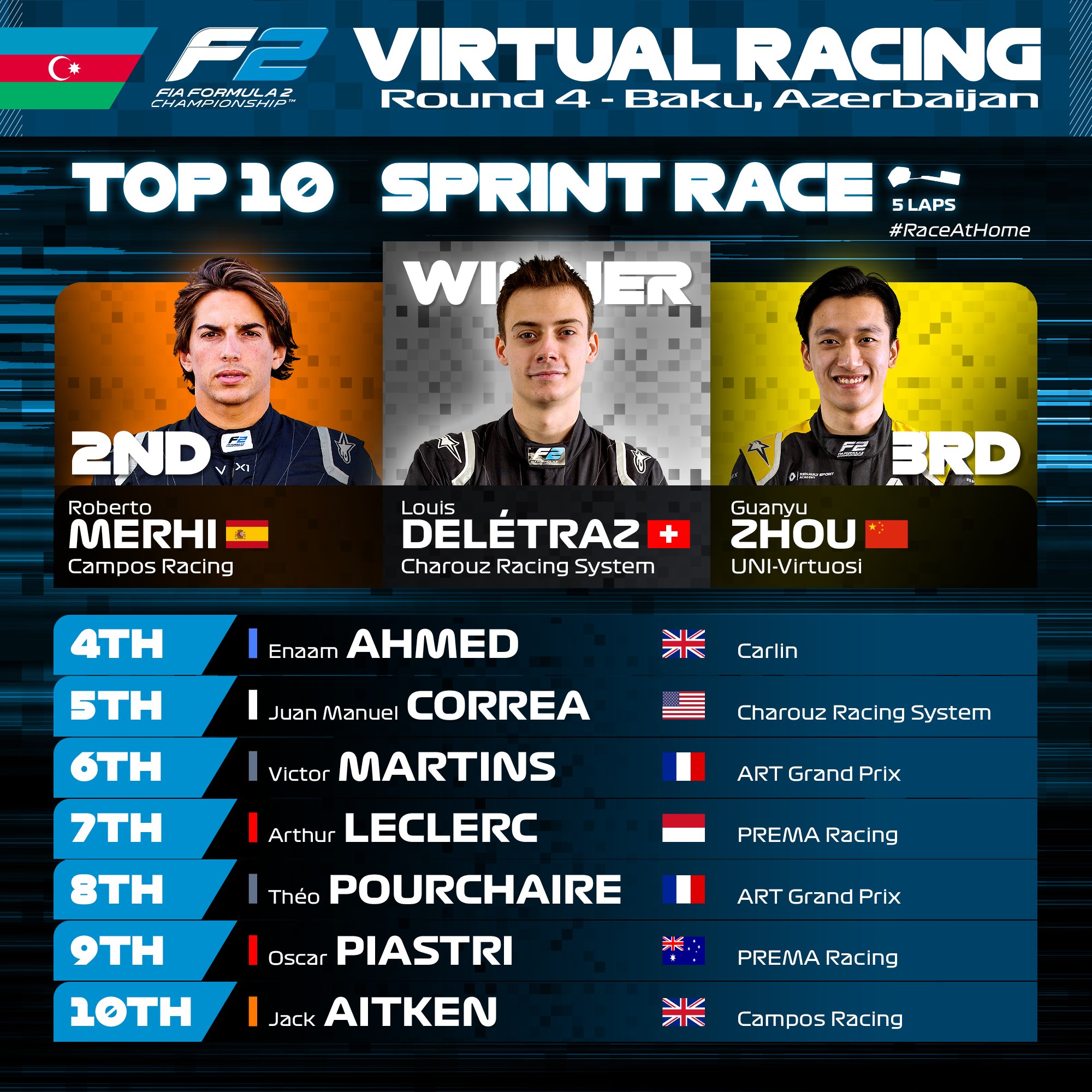