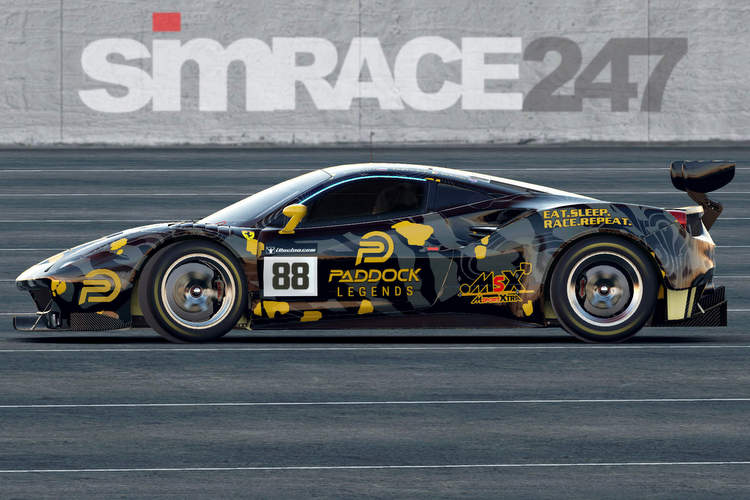 Anyone with an inkling of motor racing affairs knows full well that the sport has exploded in a virtual sense since lockdown across the globe.

With no real-world action to speak of right now, sim racing, which is basically racing via your PC or a module, has taken over and then some. New events are popping up all over the show as teams of sim racers come together, not least of all for this weekend’s virtual iRacing Nürburgring 24 Hour race, for which start-up team simRACE247.com is relishing its debut appearance in a two-car team.

The Nürburgring 24 needs no introduction — it is a race that usually attracts the cream of the GT racing crop among upward of 140 cars to race on the notorious 22km Nordschleife. It also draws a wild 250 000 crowd to the Green Hell, but with the world in lockdown, all real racing remains off. That has however not stopped the Virtual Nürburgring 24 from carrying on this weekend.

Simrace247.com is the offshoot of leading Formula 1 website grandprix247.com. The new venture not only acts as a team news portal, and also home to a new virtual race team. Now, partnered by Paddock Legends Online Shop – official merchandise suppliers to the real event – for the debut at Nordschleife, Simrace247  is entering two cars with Paddock Legends branding into the weekend’s virtual Nürburgring 24, while also offering the chance for fans to buy official 24H merchandise at special prices.

Sim racing is nothing new — any race driver worth their salt has a simulator at home to compete virtually and practice whenever they want. The games are so good that sim racing had long become standard practice as karting kids take on established stars, never mind the experts and even pros of the virtual racing world, as a fun way to practice while actually competing online.

But the lockdown has changed everything. With no racing, no testing and the world under house arrest, sim racing has quite literally exploded into a phenomenon that sees the world’s finest real-world drivers taking on established sim stars at top platinum level. Never mind thousands of virtual racers scrambling to climb that sim race ladder in the hope of taking on Norris, Verstappen and a host of contemporary race drivers that have flocked to sim racing.

The virtual Nürburgring 24 starts 13h00 Saturday 25 April and has attracted a sensational entry of the world’s top race drivers from both the real and virtual racing worlds in which Team Simrace247 will have two cars on the grid.

In its lead Paddock Legends Simrace247 A-Team Ferrari our the team’s number one driver is Ukrainian sim racing hotshot Maks Bunevich who has an incredible sim racing record with 1624 wins of his 2537 virtual race starts at last count. 2099 of those starts delivered tip-5 finishes, of which Maks started 1516 races on pole position for an average third-place finish!

Considered to be among the very best drivers in sim racing’s biggest Mazda MX-5 league, the 23-year-old system engineer from Kiev is currently the Team Simrace247 team pacemaker and has pencilled in Belgian ace Nicolas Taeymans and another hotshot in Romano Berinic.

The Paddock Legends Simrace247’s B-Team Audi GT3 for the team’s young guns will include 20-year old Russian student Vladislav Zenkov has never raced in the real world, but he’s a 5-time rFactor 1 F1 champion and the 2018 rFactor 2 IndyCar champion racing a Logitech G920 rig ‘on an awkward table with loose pedals and a chair from the Soviet Union!’

Also 20-year-old, South African Superbike champion Kewyn Snyman built his twin-monitor Logitech G29 rig in his Cape Town bike shop over the holidays and has enjoyed a meteoric rise since seriously sim racing through the shutdown. 19-year-old Kiwi Angus Claasen is a record-breaking NZ Junior track bicycle racer while 17-year-old Aussie Brock Trainor improved his iRating in a fraction of the time it should take and is a hot prospect for the future.

They will be backed up by a Silver trio, two young Englishmen in kart racer Elliot Simpson and team manager Tomlinson, an enthusiastic racer who is happy no longer be working in a Fish and Chip van as well as Canadian tech guru Bernie Lees.

Team Principal Paul Velasco said: “To be racing the virtual Nurburgring 24 is a dream come true for Team Simrace247. We have put together a broad and capable team that combines experience and youth across a broad spectrum of driving abilities and we are so excited to be going up against the best of both the real and virtual racing world at the great Nürburgring 24.

“We are also most excited to have the partnership with the official Paddock Legends backing our effort and they have been gracious enough to offer the sim racing community and fans a very special offer of discounted official 2020 Nürburgring 24 merchandise over the weekend — take advantage of the offer below right now!”

“Also big thanks to MSportXtra for supporting the project from the minute we broke cover.”

“In closing, expectations are modest going into this first of many races, while the challenges of the virtual 24 Hours is as stressful as the real race without the danger! No pressure on the drivers for our ‘house warming party’ at Nurby which will set the foundation for our future campaigns where victory will always be the prime motivator.”

Race fans keen on taking advantage of Paddock Legends Online Shop’s official Nürburgring 24 product offer can visit the #24HNRB Official Shop and use the code Simrace247 to redeem a 10% discount until 30 June 2020.

Visit Simrace247, where you will find latest sim racing news and apply to join the team too!