Sam Tomlinson – Getting back on the horse

Personally, I’ve always used sim racing as a way to let off some steam. The modern tools available now equip the consumer with the ability to plonk themselves on the grid of (almost) any race circuit in the world in the cockpit of (almost) any car ever built.

My first shot at iRacing came in May 2019 but my experience was very much limited by hardware. I was forced into a career in oval racing with the Dallara DW12 and some NASCAR trucks and K&N thrown into the mix. Although not my racing of choice, I’d become much more appreciative of the American series’ in the 18 months beforehand, so why not give it a go?

Despite the chaos and the carnage that would ensue each race, I was able to work my way up to a C license on the ovals. However, my interest in ovals would eventually wane. Some would argue that oval racing is boring as each track is identical – I’d disagree. Each circuit requires a different approach given the length of the track, the radius of the corners and the steepness of the banking but that’s perhaps something to get into further another time. The point is, I could only cope with the same car and track combinations so many times and my commitment would eventually drop off.

Skipping forward just under year, and, after discussions with Grandprix247’s Paul Velasco, we both made the decision to take the leap and form a sim racing team given our combined passion for the area. The sim of choice happened to be iRacing given it’s infrastructure advantages when it comes to competitive racing and it’s loyal community who get involved with the headline events.

As a new ‘Team Manager’, the best way to be able to understand and appreciate the progress, development and growth of your drivers is to join them on the journey. So, as of last Sunday, I have jumped back onto iRacing and gotten back on the service armed with much more adequate hardware.

Having very little road racing experience on iRacing, my second stint would start from the very bottom. The Global Mazda MX-5 Challenge is the go-to series to get out of the Rookie class. My first experience was at the quaint, fast and surprisingly technical Summit Point raceway on the Jefferson circuit. I jumped straight into the first race with just a few laps of practice under my belt and qualified 6th out of 12. To my surprise, the race was much cleaner than rookie oval races and as a result, i was able to get a third place on debut. Now with some laps under my belt, the next two races allowed me to grab a pole position and to race wins. I was really starting to like this combination.

These races got me hooked instantly. In just two days, I did the same race thirteen times. I managed to win one more race bringing my total wins to three. But perhaps I got a bit carried away and cocky with my early success. Although the pace was there, the races began to get a bit more hectic and the results suffered, as did the amount of incident points I picked up each race. Despite the frustration, I was able to rank up to a D license on Monday  and come Tuesday, it was time for some change.

For those not on iRacing, each series on the service runs for one week – Tuesday through to Monday. The Global MX-5 races were just 15 minutes each so I decided to bump that up in the Simlab Production Car series. Still rocking the MX-5, race lengths are now around 25 minutes long in a multiclass race alongside Pontiac Solstice’s, Ford Mustangs and the lesser spotted VW Jetta. At the full Summit Point circuit, results again were varied given the stronger opposition in terms of skill as compared to beforehand. Though through the resultant carnage that ensues with multiclass racing, a lights to flag win proved to be a big high this past week.

The return to iRacing has been a process of grinding through as many races as possible, mainly the same race repeatedly. The aim now is to reach out into some more series and focus on getting safety rating up. In order to access the big name events and more popular series, being a safe driver plays a greater role than being a fast driver. Ideally, I will be able to report back next week with a C license to show for my efforts, perhaps more. Although again, my experience of iRacing is very limited to a couple of cars and tracks, it’s clear the competitive aspect of the sim is unmatched by any other. 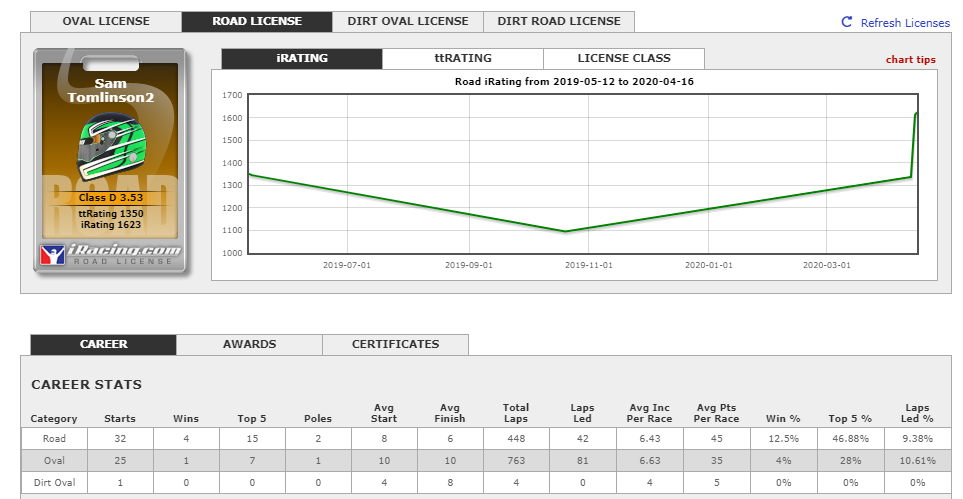